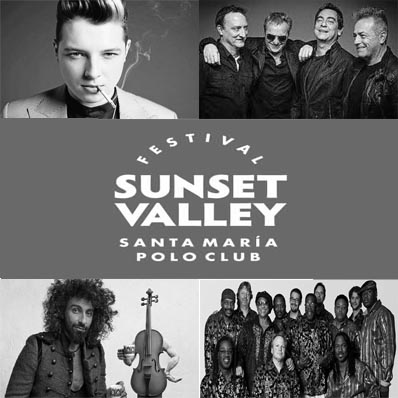 Sunset Valley Festival presented the poster for its first edition, four major concerts to be held during the first two weeks of August. A 'boutique' festival where the concerts will start at dusk in an unrivaled setting, Santa María Polo Club in Sotogrande, for a capacity of 4,000 people.

Both national and international artists will make the attendants of Sunset Valley Festival vibrate. British star John Newman, who sings, composes and produces his own music, opens the festival on Thursday, August 3 with his breakthrough music, a mix of pop, soul and electronic

The Spanish rock and pop rock band, formed in 1982, Hombres G, will sing to their greatest hits, at sunset in Sotogrande on Saturday, August 5th. The next to step on the stage of Sunset Valley Festival will be the Spanish violinist, of Lebanese origin and Armenian descent, Ara Malikian, on Saturday, August 12, with the most special and exclusive show of his tour so far (with a reduced capacity of 1,500 people).

The last big day, Monday, August 14, will feature Al McKay's Earth, Wind & Fire Experience at a party that will transport you to the 70's, the golden age of American music. The different modalities of tickets for all the concerts are already available through the festival's official website www.sunsetvalleyfestival.com/entradas

Many exciting events to look forward to this summer! Stay tuned for more!